Firies fought to save own land 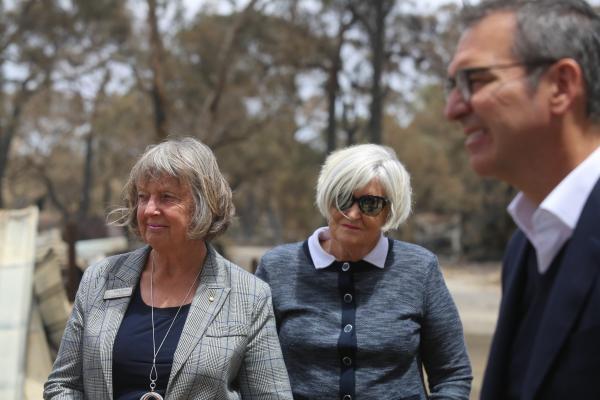 APPROXIMATELY 90pc of the landscape destroyed in Avenue-Blackford fire is owned by Country Fire Service (CFS) volunteers, with losses ranging from $50,000 to $107,000, according to Lucindale CFS group officer Patrick Ross.

But the blaze, which destroyed one house and several property, could have been worse if not for a drain located roughly 24km from Lucindale, which acted as a natural fire barrier.

He told Mr Marshall the fire – which has police say is not suspicious – could have spread as much as 50,000ha but was contained to 14,000ha as a result of good firefighting, centre pivot irrigation systems and natural firebreaks.

“I had one appliance out there which was near a massive firefront,” Mr Ross said.

“The fallback position was a drain called Jacky White Drain and when the fire moved, it hit the drain which was actually a natural firebreak for 13km.

“If that wasn’t there, the fire would be across that landscape at the same time which would have taken it from 14,000ha to 50,000ha. “That was incredibly valuable on the day.”

Mr Ross said ground crews were extremely lucky to have the Lucindale airstrip nearby, with water bombers dropping 101 loads on the fire during the fire.

“These guys are of the average age of 70 and they worked their butts off,” he said.

Mr Marshall praised emergency service volunteers for their efforts to combat the fires, saying the blaze “could have gone horribly wrong”.

“You look at things and they can go one of two ways,” he said. “Thankfully in this case it has ben very quickly contained.

“Now the recovery begins, but I think there’s already been significant moves in that direction and its fantastic to have the two local councils working together and I know [Naracoorte Lucindale mayor] Erika Vickery is very grateful for the work that Kay and her team are providing in terms of that experience at the Keilira fire.”

However, Mr Marshall said the State Government would not be providing financial assistance to primary producers affected by the fires.

Ms Vickery, who joined the tour along with Ms Rasheed, Member for MacKillop Nick McBride and Member for Barker Tony Pasin, said the tight-knit community had rallied together to assist in the clean up in the aftermath.

“The community has been very strong and busy cleaning up and helping each other, so there’s been a lot of work done for neighbours and different organisations assisting in any way they possibly can,” she said.

“It is very typical of Lucindale who really rally well around each other and support each other really well.”

She said council will host a community meeting on January 27 at 6.30pm at the Lucindale Hall with elected members, emergency services, Lucindale Lions Club members and BlazeAid to discuss the recovery.

“It is to touch base with CFS, SAPOL, other organisations that have offered assistance and also the community so that we can get some communications happening between all the agencies and those that are affected or impacted by the bushfires,” she said.

Ms Vickery said BlazeAid were scheduled to establish a camp at Yakka Park next week to help farmers with fencing requirements.

“The community has been very strong and busy cleaning up and helping each other, so there’s been a lot of work done for neighbours and different organisations assisting in any way they possibly can. “It is very typical of Lucindale who really rally well around each other and support each other really well.” Council will open the Lucindale Waste Transfer Station tomorrow (Saturday) to allow landowners and residents from fire-affected properties to dispose of hard waste at no cost.

A major fundraising event has been scheduled for February 6 with proceeds to be donated to individuals affected by the fire.